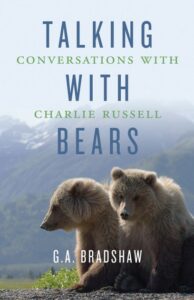 Listen to the author read the preface!

Since white settlement of North America, Grizzly Bears have been feared as unpredictable, dangerous misfits. This image has led to their near extinction. Now, formerly a stronghold for trophy hunting, British Columbia banned Grizzly hunting and established the first Grizzly Bear wilderness sanctuary. Charlie Russell was a chief architect of this change. Built on a decade of conversations with author Gay Bradshaw, Talking with Bears: Conversations with Charlie Russell explores the philosophy and science of this remarkable man and how he was able to live peaceably among Grizzlies for the seventy-plus years of his life.

Talking with Bears travels with Charlie from his native Alberta to the Yukon, Alaska, British Columbia, and Russia as he delves deeply into the lives and minds of Bears. We listen to Charlie’s internal journey as he evolved from the pioneer view of Bears as fearsome menaces to becoming a mother Bear for ten orphaned Brown Bear cubs in Russia’s Far East wilderness, Kamchatka. Through the lessons from the Bears, we hear voices of other teachers who advocate for the embrace of a new, but ancient, way of being—what Richard Rohr refers to as nondual thinking, Eckhart Tolle, presence, Thich Nhat Hanh, loving kindness, and quantum physicist David Bohm, wholeness. Talking with Bears is written for everyone and anyone yearning to revitalize their relationship with Nature.

“At times, one gets engrossed in a book because its topic is fascinating or unique. Sometimes, an author’s literary art renders an even less revelatory content irresistible. Finally, on a rare occasion, a story and an author’s way of telling this story conjoin to create a reading experience that etches itself in the heart and mind.” ― Gosia Bryja [Read more]

“I love this book. From dedication to the final page, the book made me openly weep. The tears were of homecoming, and recognition of our place in this world that is our only home. A love for wild nature – and specifically for bears! – informs every word. If we and the world survive, it will in great measure happen because of books like this one.” ― Derrick Jensen, author of The Myth of Human Supremacy.

“This extraordinary, view-altering series of true stories about the authentic nature of bears reveals them as the sensitive and intelligent beings they are. And in showing that the reality of bears is so different from our usual impressions – that they are such individuals and so prone to peace – Gay Bradshaw has given us not only another startling book but this time a deeply spiritual one.” ― Carl Safina, author of Becoming Wild and Beyond Words.

“A gripping, beautiful, unique account of two powerful minds (Gay and Charlie) coming to grips with an equally powerful one embodied in the great brown and black bears of the Pacific Northwest and of the Russian Far East. My favorite line? When Gay asks Charlie if he has ever been in love, the answer is Yes, with the bears of Kamchatka Peninsula. Reading this book will not only teach you something about bears that you will find in no other book, it will also teach you a great deal about love. What a bargain!” ― Jeffrey Masson, author of The Secret World of Farm Animals.

“Figuring out how to share the planet with other big and powerful mammals seems one of the crucial tests for human beings in the time ahead. Charlie Russell had some serious insights about how this might be possible.” ― Bill McKibben, author of, among many others, Falter: Has the Human Game Begun to Play Itself Out?

“With poetry and grace, Gay Bradshaw calls us into the magical mission of Charlie Russell’s life, mutual friendships with bears, taking us back to long-standing attitudes of Indigenous peoples who live in peaceful co-operation with wild animals. Charlie is a role model for loyalty to nature, human humility and wholeness. Bradshaw shares the warmth of his soul with us, a treasure of inspiration for those who hear the whispering calls of nature and yearn for more connection.” ― Darcia Narvaez, Professor of Psychology, University of Notre Dame; author of Neurobiology and the Development of Human Morality: Evolution, Culture and Wisdom.

“At a time of climate crisis and environmental emergency, when the flaws in our relationship with nature now clearly threaten our very existence, this book is a must-read.” ― Kevin Van Tighem, author of Bears Without Fear.

“Too often maligned and dismissed, Charlie Russell was a maverick who made the world a better place for both bears and people. Bradshaw’s latest book is a joy to read and the paean Charlie deserved.” ― Jeff Gailus, author of The Grizzly Manifesto.

“Charlie Russell defines legend. From the first time I met him 30 years ago deep in the rainforests of northern British Columbia I have remained in awe of his epic and extraordinary life’s journey to understand bears. His astounding immersion into our planet’s wildest bear havens will forever be considered the most insightful and ground-breaking bodies of work to reveal the true nature of bears. A giant of a man that will be enshrined in our history as one of the greatest explorers and wildlife conservationists of our time.” ― Ian McAllister, executive director of Pacific Wild and author of Great Bear Wild.

“In the end, one can’t help but come away from reading Talking With Bears feeling inspired and rejuvenated…” ― John E. Marriott, co-author and photographer of What Bears Teach Us and The Pipestone Wolves.

“Talking With Bears is a spellbinding book. G.A. Bradshaw masterfully weaves Charlie Russell’s own words, stories and photographs to provide a glimpse into the uncommon, yet brilliant, methods and approaches that Russell used to further his understanding of bears. The book does a wonderful job of chronicling Russell’s heartfelt connection for both bears and nature, allowing Charlie’s vision and messages to shine clearly. In the end, one can’t help but come away from reading Talking With Bears feeling inspired and rejuvenated and much more informed about how humans and bears can and should co-exist. It is truly an incredible story of how one man charted a path to loving bears unconditionally and became a Canadian legend along the way.” — John E. Marriott, co-author and photographer of What Bears Teach Us and The Pipestone Wolves: The Rise and Fall of a Wolf Family

“Charlie Russell was a man that not only walked with and understood bears but actually talked to them. He gave these misunderstood animals a soul and helped correct their picture. His mission continues with this profound book about his lifework. Overwhelming and a must-read for everyone, and especially every bear enthusiast around the world.” — David Bittner, Dr. phil. nat., Biologe

“Enlisting both stunning prose and a finely tuned cross-species sensibility, Bradshaw’s enterprise here is an urgent and vital one: to connect us with a man whose life mission was not merely to know and live at one with bears. It was, as retold by Bradshaw, also to reconnect us with nature and with our own animality. Not in some mythic realm of harmony and balance, but in a very real, if rapidly vanishing, state of mutual attentiveness and regard.”— Charles Siebert, author of Wickerby: An Urban Pastoral and The Wauchula Woods Accord: Toward A New Understanding of Animals

“Gay Bradshaw delves deeply into the passionate heart and mind of Charlie Russell as he explores and protects the lives of grizzlies in Kamchatka, Russia; the Rockies; and coastal British Columbia. She discovers a man who sees bears as individuals and intriguing characters, and she deftly paints a picture of his passionate life of “ursine inquiry.” This is a wonderful tribute to a man I had the privilege of spending time with in “bear country.”— Mike Beedell, conservation photographer; author of The Magnetic North

“The peoples of history in America, Europe and Asia made a special place for bears in their mythologies and stories. For millennia, bears were venerated by those who shared the landscape with them. My brother Charlie was on the same page. In Talking with Bears, Gay Bradshaw presents Charlie’s philosophy in a sensitive and accurate way.” – Gordon Russell

“Talking with Bears is a stunning, original and mind-changing book. Gay Bradshaw has the rare intelligence able to meet and give voice to Charles Russell’s true, courageous and determined relationship with bears. And also this is a manual, an essential text, for teaching us how to live as true human beings. The two themes, living in right relationship with the natural world and refusing the violent instincts of contemporary life, provide a footpath to avoid extinction. A must read for us to survive.” — Deena Metzger, author of, among many others, the novels, La Negra y Blanca (winner of a PEN Oakland award for Literature) and A Rain of Night Birds; co-editor of Intimate Nature: The Bond Between Women and Animals

“The face of beauty filled with a complete story. With only a glimpse the reader portends what is to follow… with a word I use very sparingly: Perfect!” — Lee Burkins, author of Soldier’s Heart

“Talking with Bears is a book close to my heart because it brings together the great mind and soul of a fellow comrade. Charlie Russell was remarkable not only for his unyielding dedication to grizzlies and brown bears, but his care for every bear he met. We shared a commitment to truth, speaking out for bears to show who these wonderful beings really are. Talking with Bears beautifully describes Charlie’s principles and philosophy which made him welcome among bears and bear society. This is an essential read to understand how to save the bears whom Charlie loved so deeply.” –  Dr. Lynn Rogers, founder and principal biologist, North American Bear Center