Elephants on the Edge

What Animals Teach Us about Humanity 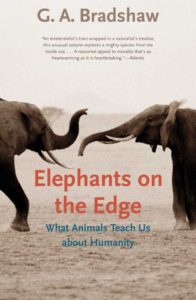 Drawing on accounts from India to Africa and California to Tennessee, and on research in neuroscience, psychology, and animal behavior, G.A. Bradshaw explores the minds, emotions, and lives of elephants. Wars, starvation, mass culls, poaching, and habitat loss have reduced elephant numbers from more than ten million to a few hundred thousand, leaving orphans bereft of the elders who would normally mentor them.

As a consequence, traumatized elephants have become aggressive against people, other animals, and even one another; their behavior is comparable to that of humans who have experienced genocide, other types of violence, and social collapse. By exploring the elephant mind and experience in the wild and in captivity, Bradshaw bears witness to the breakdown of ancient elephant cultures.

All is not lost. People are working to save elephants by rescuing orphaned infants and rehabilitating adult zoo and circus elephants, using the same principles psychologists apply in treating humans who have survived trauma. Bradshaw urges us to support these and other models of elephant recovery and to solve pressing social and environmental crises affecting all animals, human or not.

“Elephants on the Edge is very thoroughly researched and beautifully presented—a devastating, scientific chronicle of the ignorance, cruelty, and mismanagement that placed these magnificent creatures in their present dire situation. Among Bradshaw’s many virtues is that she exposes the cowardice of scientists who are well aware of the damage now in progress but are unwilling to support animal rights or to condemn animal holocausts. We cannot possibly understand the world we live in unless we acknowledge the role we play in its destruction. Should we continue our Nazi-like behavior toward elephants, and indeed, toward any living creatures? Those who read this book won’t want to.”—Elizabeth Marshall Thomas, author of The Hidden Life of Dogs and of The Old Way: A Story of the First People

“African peoples and wildlife have been bound together in a delicate network of interdependence since ancient times. The arrival of colonialism tore apart these bonds: human brother now fights against elephant brother, and mothers of both species mourn. Elephants on the Edge is an urgent call to end this strife and for humanity to embrace once more the traditions that kept the peace with our animal kin.”—Archbishop Emeritus Desmond M. Tutu, 1984 Nobel Peace Prize Laureate