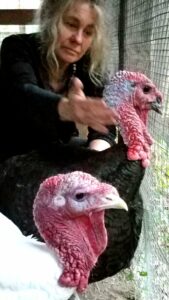 Gay Bradshaw, PhD, PhD, is founder and Executive Director of The Kerulos Center for Nonviolence. Her establishment of the field of trans-species psychology— the theory and practice animal psychological rehabilitation and conservation—began with the discovery of PTSD in wild elephants. She has written about this in her book, Elephants on the Edge: What Animals Teach Us About Humanity (Yale University Press, 2009).

Carnivore Minds: Who These Fearsome Animals Really Are (Yale University Press, 2017) explores the inner lives of Sharks, Rattlesnakes, Bears, and other carnivores, challenging deeply-held cultural and political prejudices against these animals.

Her forthcoming book, Talking with Bears: Conversations with Charlie Russell (Rocky Mountain Books, 2020), introduces a new, but ancient, species-common ontology and episteme, ways of existing and knowing. Built on nearly ten years of conversations together, this book explores the philosophy, methods, and sensibilities of Charlie Russell’s science, which span his more than seven decades living with bears in North America and Russia. These accounts provide a unique opportunity to experience an intact universe, the world before humanity imposed its fear-sharpened fences to force artificial separation from animal kin. Reflecting on their collaboration together, Charlie Russell wrote, “What most strikes me about Gay and her work and what makes her stand out is that I saw that she was telling the truth. In that way she was just like another one of my bears.”

The Elephant Letters: The Story of Billy and Kani, is for children and adults. It tells the tale of two Kenyan elephants, cousins separated in childhood, who live radically different lives. A musical based on this book is in the works with production slated for the New York City area.

Dr. Bradshaw holds doctorate degrees in ecology and psychology, and has published, taught, and lectured widely in these fields both in the U.S. and internationally. Her research has been featured in numerous media, including ABC 20/20, Stern, National Geographic, New York Times, Time, New Scientist, Nature, and the London Telegraph. Much of her research focuses on the effects of violence on and trauma recovery of Parrots, Elephants, and Chimpanzees in captivity. Her area of specialization is elderly individuals who have suffered capture and captivity.